, the square writing by Alexander Fakoó

The Quadoo Alphabet (the Quadoo Writing) as square braille or square writing for the blind (also called line alphabet, square script or square scripture) was developed for handwritten notes by


For the Quadoo Alphabet, only the sides and diagonals of a square are

And best of all: Quadoo contains clearly defined numbers.

Writing by hand with the stencil of squares

or the Quadoo Writing Slate (Draft) 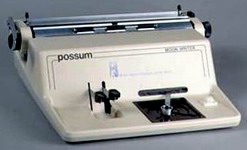 Draft of electronic input with 6 buttons


Here is an excerpt in the square script for the


Do you have ideas for marketing?
Would you like to use Quadoo for promotional purposes?
Get in