After the dot writing by Louis Braille slowly became established

In 1839 he published his new dot writing, which

In his list, the dots to be set are listed column by column. Also all French

In comparison with Valentin Haüy's writing, it is striking that the 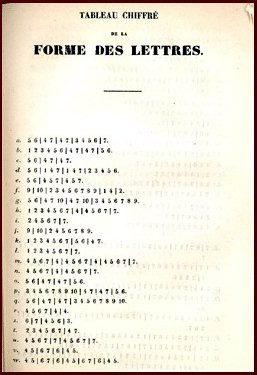 Excerpt from the brochure of Louis Braille from 1839:

It were written primarily in lowercase letters, but these


In Spain, a 10-dot writing was used under the name Ballu Writing, which was written