The site fakoo.de/en is about alphabets towards

Have you ever considered how blind people understand our world? Since blind people can only rely on their sense of touch, hearing and smell, much of the information that people who can see view optically with our eyes, the blind must "see" in a tactile manner, using their hands to touch.

By scanning of surfaces with their fingertips, "plastic pictures" result in the minds of a blind person - that is, the information that they receive by touching lets the object appear in their mind's eye. 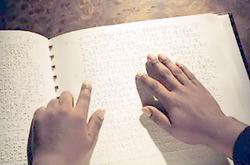 The writing which we can read with our eyes cannot be seen by blind people. For a long time in the past, the blind were isolated and always relied on others for help. Teaching material was imparted acoustically, and many projects failed which aimed to teach the blind the letters of the alphabet through relief-like figures.

It was first Louis Braille, who became blind at the age of 3, who recognized in 1820 (when he had just turned 11 years old), that the letters of an alphabet for blind people should consist of dots, in order to clearly differentiate each letter. Braille simplified the system of Barbier and perfected it until Braille could finally present his own writing system for the blind in 1825 (Braille writing, dot writing, blind alphabet, Braille code) consisting of a system of 6 dots. 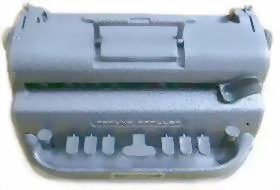 Despite initial problems surrounding the use of the Braille writing system - it was occasionally even forbidden because sighted people believed that the Braille system would isolate the blind even more, the blind were able to push forth with their new writing system. Today, the braille is used in phonetically adapted form in almost every country on earth.

Tools for blind people, like this typewriter, were especially created so that they could more easily use their dot writing. Books printed in Braille are not just difficult and expensive, the resulting books are much bigger and heavier than their counterparts in print too. Print is the term that blind people use for the writing system of sighted people.

Only the use of modern technology first permitted the publication of the Braille script on a Braille display. In this way, information does not first have to be printed on paper in order that blind people can read it. By connecting the display with a computer, a substantially more effective use of written infomation is possible. Storage and editing are perfomed by the computer, reading is done by outputting line by line on a Braille display. Equipment is rounded off with printers in the Braille script.

Sighted people can also learn Braille, optically and directly at the computer! You'll find out that it's not that hard!

By using an interactive learning method you will very quickly learn the respective alphabet of the blind. To reinforce what you've learned, there are additional exercise pages and the alphabet is available as a graphic for download.

The website fakoo.de has been online since July 31st 2006.

more alphabets you can find on overview of all alphabets

Commemorative coin to the 200th day of birth of Louis Braille